Tonsils are the pair of lymph nodes located on the back of the throat, one on each side. Tonsils are part of the body’s defence mechanism and have a function in preventing infections. They form the first line of defence for protection and thus remain vulnerable to infections, however, tonsil’s function decline after puberty, which is why adults have low cases of tonsillitis. 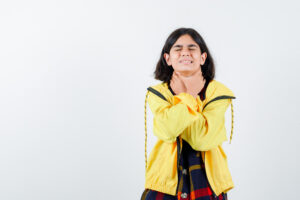 Inflammation of tonsils due to any infection is called tonsillitis. As we have discussed that tonsils function declines after puberty, the cases of tonsillitis are more common in childhood, though it can happen at any age. Tonsillitis is a contagious condition and is most commonly caused due to viral and bacterial infections.

The most common sign and symptoms of tonsillitis may include-

Tonsillitis can happen to small children also who are unable to describe their symptoms. They may show signs like-

Difficulty in breathing during sleep
Infections may go deep into tissues or cause a peritonsillar abscess.

Acute tonsillitis as we discussed are mostly healed on its own, but if required, home remedies can be very useful to subside the symptoms in a few days by itself. Chronic and recurrent tonsillitis have more serious and long term symptoms that may require proper medical intervention to cure.

The conventional system of medicine has tonsillectomy as the only treatment if they are not recovered by antibiotics.

Homeopathic treatment for tonsillitis is the only way by which children can get a permanent cure for this problem. Homoeopathy goes deep enough to cure the root cause of the disease and prevent its recurrences in the future.